Ever looked at a collection of clocks marking time from around the world? You may have noticed that Nepal is 15 minutes ahead of its border neighbor India, and it is 45 minutes different when comparing to other countries’ time zones.

There are only three time zones with a 45-minute offset from Coordinated Universal Time (UTC), and Nepal Standard Time (NST) is one of them. The history behind it is quite unusual.

An article from the Nepali Times points out that before the standardized time reckoning, time was kept in Nepal as such:

“In the Malla period, Kathmandu residents had their own traditional way for telling time. If you wanted to know the exact time, you went to a pond near Hanuman Dhoka where an official would tell you how many pala had submerged since dawn. Each pala had a tiny hole and would fill up in exactly 24 minutes. ‘This method was OK for us until the Westerners arrived,’ explains Sambaraj Acharya, professor at Balmiki Campus.” 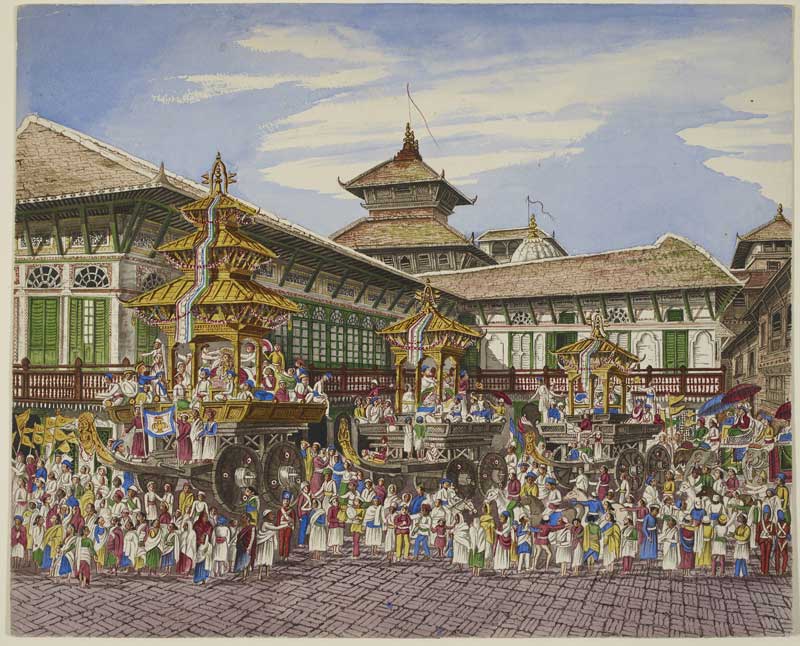 The Hanuman Dhoka in the 1850s, during the Kumari Jatra festivities (Courtesy Wikipedia CC0 1.0)

Time ticks along just fine, why worry about managing it?

With the world “shrinking” due to railway and other travel, there was pressure worldwide to create a standardized time system.

Many countries had various different “local times” throughout their own borders, all with mismatched times, making railway management very complicated.

World leaders convened a conference in 1884 in the United States called the International Meridian Conference with the purpose of selecting a prime meridian to standardize reckoning. (I wonder how they decided on what time to start?)

The Observatory of Greenwich in London was selected as the initial meridian from which other times zones would be offset based on 24 standard meridians of longitude surrounding the globe (east of Greenwich being plus and west being minus).

That’s were we get abbreviation GMT standing for Greenwich Mean Time.

Nepali Standard Time was adopted in 1956 as detailed in the Nepali Times “with the meridian at Mt Gauri Shankar, 100km east of Kathmandu. It wasn’t Mt Everest because Gauri Shankar was closer to Nepal’s centre of gravity, as it were.”

Apparently, Nepal could have been on the same meridian India used at the time, but the meridian would have divided Nepal too unevenly, so Gauri Shankar was selected.

The country itself lies between 80°E and 88°E longitudes. That puts a difference of 32 clock minutes (1° of longitude = 4 minutes) between ends of the country.

Somehow, that makes me think I can time travel, but it doesn’t work that way. Sigh.

It means that Nepal is wide enough for just one time zone.

You would think that the time meridian chosen for Nepal would split the country right in the center so that the sun would be over the middle of the country at noon, but remember, the international convention divided the world, not countries.

The division for the area would have put Nepal on the same meridian that India used, but it would have divided the country far west of its center.

Now countries can’t go moving their meridian…ahem…well…they can, sort of.

Remember, the divisions set by the international congress divided the world into 24 standard meridians making an hour between each.

Some countries because of how they were situated, opted for halfway between meridians so their time is 30 min different (India is one of these).

With the original option for a Nepali meridian too far west, the next 30 minute jump to the standard meridian would place it too far east. Remember, Nepal has only 8 degrees of longitude end-to-end giving it only about 32 minutes across for meridian markers.

So, Nepal chose the next best thing, going halfway to the next meridian gaining 15 minutes over India’s current meridian.

Breaking it down = 5 hours from Greenwich, London + 30 minutes (halfway between meridians which intersected too far west in Nepal) + 15 minutes (halfway to the next meridian marker but better “centered” in the country).

Some think Nepal should adopt the same time as its neighbor India (back 15 minutes).

Others think it’s better to leave things as is, and keep the mark of distinction…literally 15 minutes of fame.

While others think it would be pretty cool to go back to the pala method of which it took 5 to research and write this article.

Time is a funny thing.

However you keep time, save your memories and adventures each day in style in a handmade leather journal from Nepal. We can’t promise it will help you be 15 minutes ahead for everything, but maybe it can help you recall your adventures for years to come.

Save 10% on your First Order

Welcome! Your coupon email has been sent and will arrive soon.